In France the legendary “long-racing-bicycle-marathon” Paris-Brest-Paris took place in 2007. It takes place every four years, just as well as the Olympics.

This racing is the oldest bicycle race of the world and older than the “Tour de France”. Cyclists from all over the world take part in this terrific bicycle-spectacle. There, you have to pay attention to the old and traditional rules of cycling. Escort vehicles are not allowed, so you have to victual and orient yourself without help.

For this extreme-marathons I had to prepare myself in a very intensively way. Because of the mild climate I could practice with my bike during my studies abroad all winter long. As a result of this I already was as fit as a fiddle in spring to get my first qualification of 200 kilometers without any problems in constant rain and 4 ° C-cold. The other qualifications followed in the next weeks. For a better preparation I took part in the 24hours-bicycle-racing and I went by bike to Salzburg in 27 hours 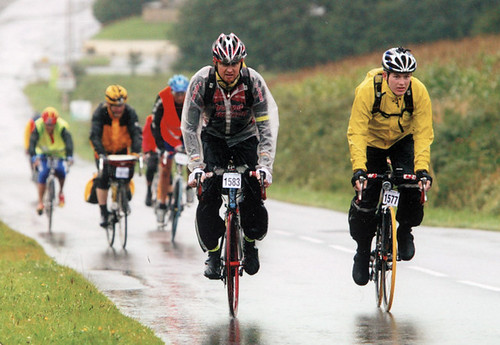 At the 20 of August the racing started in Paris. Divided in different starting-groups, I started together with my racing-friend Ingo in the night-group at 9:00 p.m. Wit our equipment which contained a illuminated vest and some lights, we started our racing into the night. The first 140 kilometers spinned away. Then, we reached the first checkpoint / control station. After ca. 250 kilometers it began to rain awfully. However, the rain was no big deal because of our good fittings. The biggest difficulty is the mental strength. You always have to fight against tiredness. Talking to other cyclist in the state of fatigue is the best medicine. Already in the second night we reached the city of Brest after 625 kilometers. I was at my best and we formed a group of 4 men which was at good mood. In the third night it rained again very strongly and adverse winds came up which had a great effect on our physical and mental reserves. However capitulation is no way out! There were still 250 kilometers to our aim. The rain slowly decreased and the streets got drier. As we could see Paris our motivation increased constantly. We kept fighting.

Arriving at the Finish, we were well received by a shower of sparkling wine. We were so happy and close to tears. We made it!

In the year of 2011 there will be the next Paris-Brest-Paris-Racing and if circumstances permitting, I will take part in it again.

Hi. I'm Daniel John. I'm on a bycicle tour from September to November 2008 through the United States, New Zealand and Australia. Join me.