With the tandem to spain

Start of this journey by tandem was the „Schwarzwald”. The first stage led us to France in the beautiful city of Colmar. After a visiting break we cycled to the first climb of the Vosges. This summer was very hot and we didn’t have enough water in our equipment. For this reason we knock at some doors and asked the people for water which they directly gave us. The way through the mountains was very sweaty but the wonderful countryside was worth it. 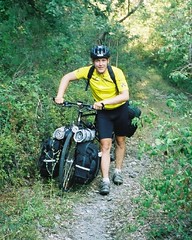 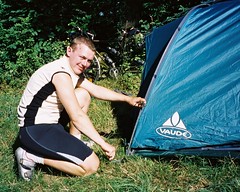 A flat part to the south-western direction to Clermont-Ferrand at the foot of the Massif Central followed. There we had a day of rest. This was necessary because we had a lot of clothes to wash and I needed to write down some notes in my diary. The Massif Central is composed of lapsed vulcans and from this point you can see the Puy de Dome, one of the most famous elevations of these mountains.

The journey continued with a confortable mountain railway. From Agen over the Lowlands to the south-western corner of France. On the campsite was an amazing atmosphere because the people waited for the cyclists of the Tour de France. At the next day when the cyclists arrived, I was fascinated and as Lance Armstrong passed my way, I was totally happy. An unforgettable event!

Our group contained 3 persons on the following day, because a new friend named Andy joined us. We crossed the Pyrenees and reached Aragonia.

We moved on and it was very hot in the south of the Pyrenees. The rail often goes straight ahead and few people live there.

After a recreating night we went to Andorra La Vella. It was a short stage since we camped in the capital city. A lot of people live there and every house has its own style. The next stage has a point of pass of 2408 meters. The world of the mountains is very different from the Alpes. It is beautiful in its own way. As we reached France again, we crossed Carcassone. The castle of Carcassonne has been declared a world cultural heritage and it is worth a visit.

Towards East, we enjoyed a bath in the Mediterranean Sea and finally arrived our guest family in Uzés. There, we spent 5 days and got to know the French way of life. Because of the longer residence we got into time trouble. Therefor we went some miles by the faster TGV train. In Switzerland was the control very strict, but they led us go our way. Some lakes passed by at our last kilometres through Basel and the riverside of the Rhine back to our startplace “Schwarzwald”.

Rebecca and I covered a distance of 2700 kilometers in 4 weeks where we crossed the Vosges, the Massif Central and two times the Pyrenees.

Hi. I'm Daniel John. I'm on a bycicle tour from September to November 2008 through the United States, New Zealand and Australia. Join me.